On the week, the national gas price average held steady at $2.56, with the Kansas average rising two cents to $2.35 per gallon, but motorists can expect volatility at the pump in the coming days and weeks. Over the weekend, Saudi Arabia experienced drone attacks on two major oil facilities – including the world’s largest, Abqaiq. The attacks have taken 5.7 million barrels of crude oil per day off the market, accounting for about 6% of the global supply.

Prior to the attacks, global crude oil supply was very healthy, in fact sitting on a global glut of stocks. Regardless, initial market reaction to the attacks spiked crude oil prices.  At the start of the work week, crude oil (West Texas Intermediate, WTI) is trading for $5/bbl more than on Friday’s closing, up to $61/bbl – a price point for crude not seen since May.

“Kansans and motorists across America can expect local pump prices to start to increase this week. The jump could end up being as much as a quarter per gallon throughout this month,” said Shawn Steward, AAA Kansas spokesperson. “Whether this is a short or long term trend will be determined by the price of crude oil prices and how quickly the facilities in Saudi Arabia can recover and get back online.”

Damage to the facilities is still being assessed, but there is no word if it will be days, weeks or even months before infrastructure is repaired. To ease concerns, President Trump said he has authorized the release of crude from the Strategic Petroleum Reserve. Other Saudi-oil-consuming countries also have emergency reserves to help back-fill the global loss, if needed.

While U.S. gasoline stock levels have been decreasing the past few weeks, total domestic stocks sit at 228 million bbl, which is ahead of the five-year average for this time of year by several million bbl. Today’s national gas price average is 7 cents cheaper than last month and 28 cents cheaper than this time last year. But these gaps are likely to shrink as the market adjusts to the news and crude oil prices increase.

AAA has a variety of resources to help motorists save on fuel:

“There are actions drivers can take to get better gas mileage and save money at the pumps,” added AAA Kansas’ Steward. “First, accelerate gradually, avoid jackrabbit starts, and stick to the speed limit. You should also make sure your tires are properly inflated. Check the sticker inside the driver’s door or the vehicle owner’s manual for recommended tire air pressure. Finally, replace the vehicle’s air filter and have your engine tuned up regularly to make sure it operates as efficiently as possible.”

This week’s gas price quick stats
Great Lakes and Central States
Pump prices range from as much as 13 cents more expensive to nine cents cheaper in the region on the week. Ohio (+13 cents) and Michigan (-9 cents) saw the biggest weekly changes in the region and the country. Gas prices are noticeably more expensive in Illinois (+6 cents), while Kansas (+2 cents), Missouri (+1 cent), Indiana (+1 cent), Kentucky (+1 cent) and Nebraska are more expensive but just by a couple of pennies. 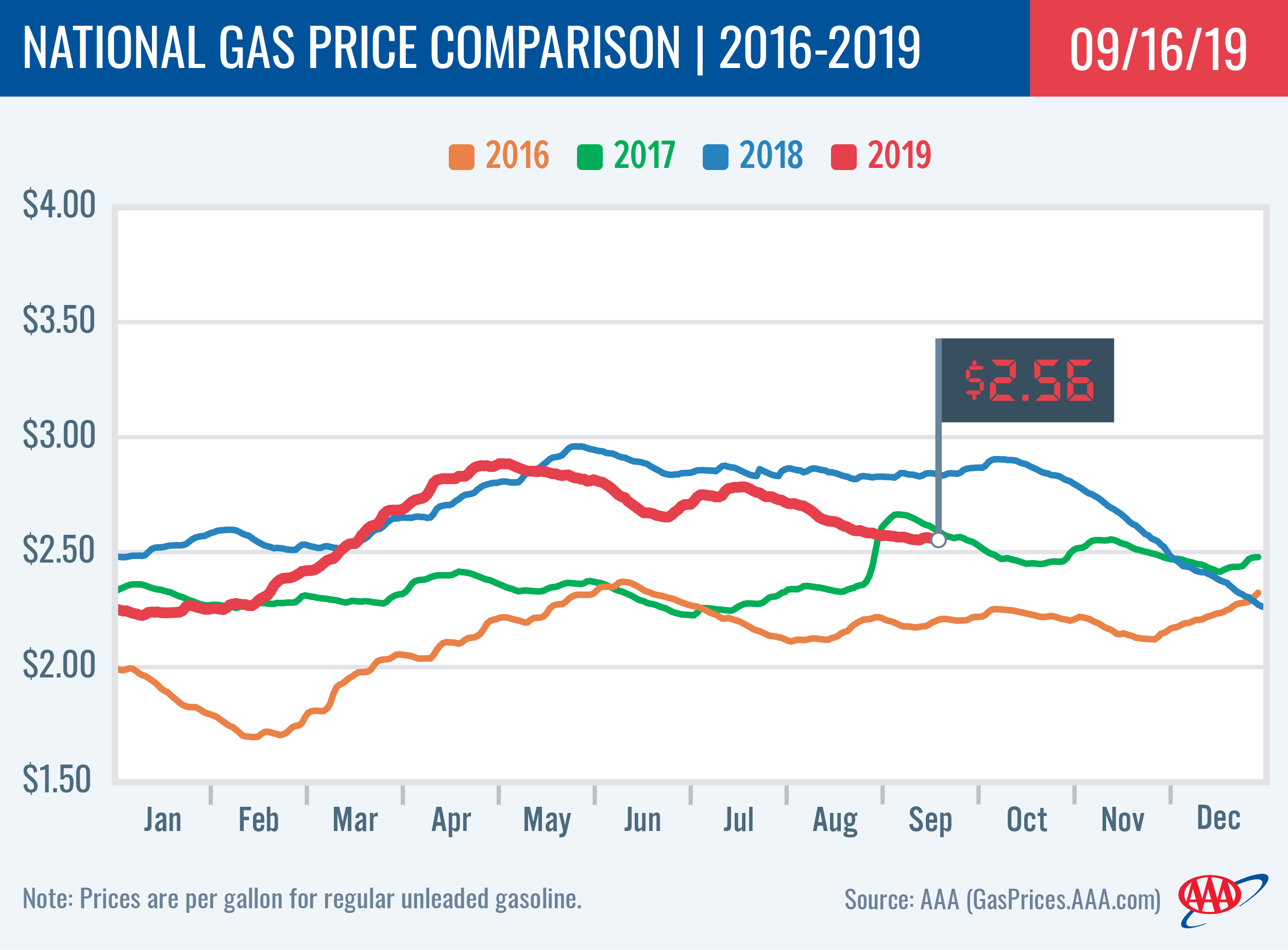 Gasoline stocks built by a significant 1.6 million bbl in EIA’s latest report. That increases total stocks for the Great Lakes and Central States to 53 million bbl, which is on par with levels this time last year. Regional refinery utilization remains strong at 100%, which should ultimately lead to cheaper gas prices for the region. However, any major jumps in crude oil prices may reverse this trend and lead to more expensive gas prices nationally and in the region.
Oil market dynamics
At the close of Friday’s formal trading session on the NYMEX, WTI decreased by 24 cents to settle at $54.85, but on Monday, the price was up to $61/bbl.
Overall, oil prices were mixed. Early in the week, oil prices fell after reports emerged that the Trump Administration is considering relaxing sanctions on Iran, which would put more oil into an already oversupplied market. However, the losses were tempered by EIA’s weekly report showing that total domestic crude inventories fell by 6.9 million bbl last week. They now sit at 416.1 million bbl, which is nearly 20 million bbl higher than were they were at this same time last year. For this week, crude prices will see increases due to increased tension in the Middle East – specifically stemming from the attacks in Saudi Arabia –  and could be bolstered by increased optimism that China and the U.S., the world’s two largest crude consumers, may be nearing a resolution to the trade war.
Motorists can find current gas prices along their route with the free AAA Mobile app for iPhone, iPad and Android. The app can also be used to map a route, find discounts, book a hotel and access AAA roadside assistance. Learn more at AAA.com/mobile
AAA provides automotive, travel, and insurance services to 59 million members nationwide and nearly 347,000 members in Kansas. AAA advocates for the safety and mobility of its members and has been committed to outstanding road service for more than 100 years. AAA is a non-stock, non-profit corporation working on behalf of motorists, who can now map a route, find local gas prices, discover discounts, book a hotel, and track their roadside assistance service with the AAA Mobile app (AAA.com/mobile) for iPhone, iPad and Android. For more information, visit www.AAA.com.
Categories: Agriculture, Kansas